Cai Wen briefs everyone: it is time to put the final touches on his plan to change the name of the Jade Taiga. Most of the steps have been done - the spire has dragon iconography, several Imperial offices are willing to install local offices, and the Taiga Regent has agreed to get a meeting of the Regency Council called there while the standard Council offices in the Dragon’s Throne are unavailable. Precious Jade has also signed on as an ally, in exchange for promises from Xiao Fa to keep her as the First Imperial Concubine. He has also promised Ando some blessings on the Imperial Spy Office, though the details of the blessings end up somewhat obscured. 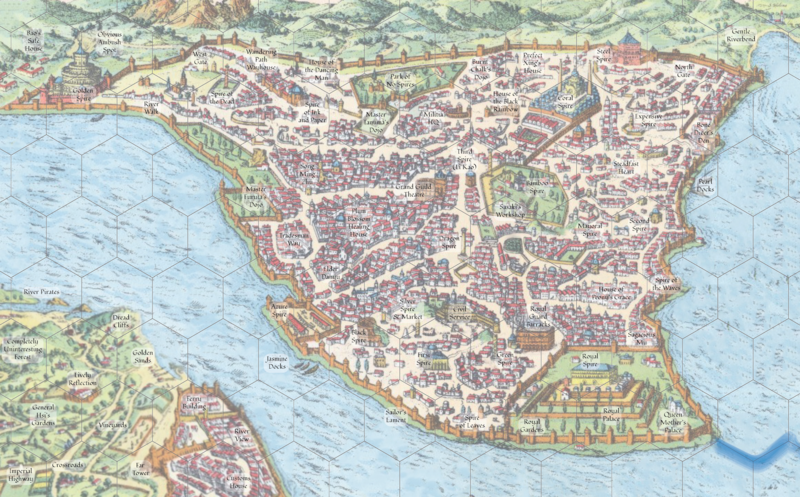 Others also have preparations to make for the upcoming political battles. Sima says that there will be enemies to come, and the Law will let everyone interact in a controlled environment without smiting. He gives Xiao Fa a set of Abilities of Law, to be passed out so that people may work within the rules yet still accomplish more.

Lucinda, Lijuan's majordomo (and minion of the Light) has favors for Lijuan to distribute, enabling people to trigger a longer scene or a fight, rather than a single make or break roll to resolve their issues.

The Regency councilors (as well as other visitors) begin to arrive in the city, and will soon start to propose edicts. Events start to happen, which must be dealt with in order to prevent the Regency Councilors from becoming alarmed and departing prematurely. Some of the events, if resolved well, will earn the favor of a regent, which can be used to sway them on a proposed edict that they do not have a strong opinion about.

Takanata draws some rather puzzling art, as does Lijuan.

As the Regents begin to arrive in the city, they each announce the edicts that they wish passed. The Mayor has an honorary seat on the Regency Council - it is not clear whether that is the Mayor of the Dragon's Throne (as usual) or the Mayor of the City of Spires (they’re in his city) in this case, but the former arrives first. (The Obsidian Warlord also has an honorary seat, but is too late to do anything.)

Plains of Honor Regent
Move the Southeast Command of the Dragon Army from the City of Light to Jabon.
Support: Plains, Heights.
Opposition: Precincts

Hon'eth Arcade Regent
Budget for a new round of refurbishment and authority to enhance and expand the parks and green spaces of the Dragon's Throne.
Support: Dragon's Throne, Taiga.

Shrouded Isle Regent
To increase trade, levy a docking fee on seacoast ports, to be paid for merchant vessels out of a joint fund drawn from the port trade associations and to be used for harbor improvements.
Support: Shrouded Isle, Arcade.
Opposition: Dragon's Throne

Things begin happening, and people rush about the city to be in position to deal with them.

Sasaki's Workshop
Hint:Only sorcerers will be admitted to Sasaki's workshop while the experiment is in progress.
Potential peril: 0
Potential annoyance: 2
Deadline: In two hours

This proves to be a self-sweeping broom gone awry, and Kuan-Xi and Shen-Ji successfully defuse it.

This demonstration turns out to be provoked by Tai Lung, who suggests that Master Zhou has gone senile. Masters Zhou and Deng cut the tension with some careful punching, and accrue one annoyance.

Min Feng's mother is apparently alarmed at having been invited to tea with the Purple Duke and a fancy matchmaker. Min Feng and Cai Wen manage to cut off the Purple Duke's attempt to set up a marriage with Min Feng, after some amusing misunderstandings, and accrue one annoyance.

Meanwhile, Takanata drops by Li Kao's spire, and gets a few more details about the mechanic. Apparently, too much annoyance will mutate into alarm, and both alarm and peril will cause regents to decide to leave the city early.

This turns out to be a kidnapping attempt on Prefect Xing's wife! Wei Han intimidates it away, but peril ticks up by one and annoyance by two.

Around the city, a high keening sound is heard from the Golden Spire. Kuan-Xi and Xiao Fa head there, and are hit by a wave of grief and anguish from Phoenix: All those that you love die. Burn it all down.

Phoenix's emotions hit Kuan-Xi particularly hard, and she tells Shen-Ji to firebomb the map. Surprisingly, he does not. (1 peril and 1 annoyance)

Kasumi burns her teleport, and the upcoming events become a bit easier.

Queen Mother's House
Hint: The King's mother is getting on in years.
Potential peril: 0
Potential annoyance: 5
Deadline: In five hours

Yanyu and Xian and Prince Ti Jun turn up at the Queen Mother's house to see her. She clutches her heart, having some sort of attack. Xian succeeds in a medicine roll, and Yanyu turns out to have a stash of particularly medicinal herbs in her box. Ti Jun also proves to have an antidote, but it isn't needed, so he spends his roll on yoinking the credit. Xian is suspicious why Ti Jun happened to have an antidote so ready. Only one annoyance is generated.

Meanwhile, in the Golden Spire, Kuan-Xi finds herself with a star in her hand. Xiao Fa talks to Dragon, who tells him to make sure the star stays safe, and he manages to talk Kuan-Xi down a bit. Maybe everyone she loves will die, but that doesn't mean she has to burn it all down in advance.

Magpie points out that "everyone talks to Dragon" was Xiao Fa's turn, but everyone else can talk to a Great Spirit too. Kuan-Xi asks about Lijuan's prophetic art, as everyone is particularly interested in the purple blob. The party is playing the Game, but others are playing on the same board, including Light versus Dark, Butterfly versus Fox (and Serpent), and two players that Crane is not permitted to draw. Shen-Ji asks Bear about the Light and the Dark, and is answered that they do recur, and one way to deal with them is to lure them into fighting each other directly.

Back at the Golden Spire, Shuyan buys skill in Regal from Fox, and Xiao Fa gets his grief shaken out of him.

Master Zhou investigates the Spire of Ink and Paper, and thinks that scrolls have been moved around, possibly in a way that is cryptomantically significant. His best guess is that it is related to a realm of a non-Imperial spirit, being actively hidden.

The mist summons all immortals (including Takanata and Li the Wanderer) as well as Kuan-Xi, who is transported away from the ferry building where she was about to meet Ezokin, much to her frustration. Takanata puts his hand upon the pattern to get Wei Han to the ferry building in time instead. Someone mysterious and charming (believed to be Fox) ends up getting the money intended for Ezokin.

No one makes it to the forest - no doubt nothing of interest happens.

A strike team grabs the crate, which turns out to be cursed silk. They eventually deliver it to the vault at Tahiti. (1 annoyance)

Cai Wen forges the militia accords here, earning the regent's favor and only one annoyance.

Back at the Spire of the Dead, the Golden Prince informs them that the Mortal Blade, Miyamoto Musashi, has passed to the World After. Either Master Deng or Ti Jun's blademistress, or a third who is not here, would be suitable for the position. Deng agrees to take the position; this will require that he officially leave both the White Lotus and the House of Exuberant Interference.

As it turns out, Xian has a comparative spigot hoop, so generating a wine tasting report is not a problem. However, getting it to the Arcade regent is a bit trickier, as the vineyards are quite a ways away from the Dragon Spire. Min Feng convinces the Arcade regent to take a brief nap, and Xian sends him a dream. (The hoop's third adjective is "hearing".)

Kasumi shows up to meet with the demons. They were apparently part of the World Below rebellion, and were planning to storm the Golden Spire, but were drawn too late. They offer Kasumi several bargains, but she claims to not be authorized to negotiate. (3 annoyance)

Some potential troubles that either were not dealt with, or the dealing-with was not noted:

Jasmine Docks
Hint: Aid the Jasmine in claiming the hexes around the Queen Mother's Palace as Her own.
Potential peril: 1
Potential annoyance: 3
Deadline: in three hours

Xiao Fa makes his speech (48 successes) announcing his engagement to Min Feng. It’s quite fabulous, but several of the Regency Council members erupt into shouting, as making an imperial engagement announcement is practically claiming the throne. The King’s mother storms in and chastizes them all saying, “I’m not sure how such things are done in the Dragon’s Throne, but here ``in the Foxruns’’, these things are handled with decorm and delicacy.”

People assume the King’s mother was Fox in disguise, as the name change of the country seems to stick hard.

The repayment of Ezokin's debt seems to have resulted in the first 8.5 tael of Min Feng and Xiao Fa's wedding arrangements being free. Ezokin considers his debt to Kuan Xi paid. Kuan-Xi doesn't think this is an appropriate repayment of the debt, but Fox was definitely involved, and so she doesn’t fight it.

The Dark v Light game is a shutout for the Dark, which had thirty abilities used, while no one used the Light powerups.

The Taiga regent is the only one to have his edict passed.

And finally, the people of the land realize that the name of the country is the Foxruns, and has always been so (except for those who have crossed the Walls, who remember the change).
Retrieved from "http://boojum.scripts.mit.edu/Dragon/index.php?title=Aspirations&oldid=13066"