Lijuan and Takanata both have some prophetic art. 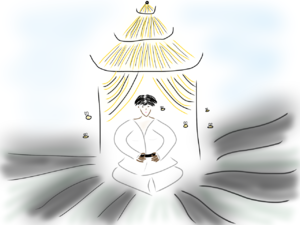 Most of the party (save Yanyu and Kasumi) train with Master Zhou, and Min Feng and Shuyan both buy some more kung fu, due to the inherent White Pagoda Kung Fu chi suffusing the mountain. Xiao Fa realizes with horror that he no longer has the Sankara Stone of Destruction - someone has cleaned it into party loot, and it has vanished.

Min Feng notices that Tai Lung is both shielded against her ability to locate him, and on his way here. Well, that's presumably what the guardians are for.

Yanzi has the guardians and the anchors gathered in the senchi chamber of the White Pagoda, and the party sets out into the Dreams of the World Below, in order to finally find Su-Yin.

Master Deng leads, into a realm where masked bugs are eating from giant mushrooms.

The bugs look up suspiciously, and then swarm the party - each person has to deal with a bug, and has to beat their expected number of successes in order to defeat it (the first rule). Deng attempts to chop everyone's bug himself, splitting his dice, succeeding in all but one, and he is nearly lost to a distant "jail" card, until he spends a karma.

What next? Master Zhou thinks that someone needs to remain in bugland, to keep the way out open, so Cai Wen stays, unpacking a picnic.

The next question to be addressed is whether the group should go forward together or split up. It seems likely that the tone of the dream encountered has to do with who is leading, so after some discussion, they settle on a plan of splitting between body-ish people and mind-ish people, so as to encounter fighty and mindy dreams. Having settled on this plan, Merit leads Wei Han and Xiao Fa[1] to a dream of a polar bear with a glowing book.

Merit takes the opportunity to research the World of Dreams Below, and determines that experience and advancement only come through failure. Wei Han searches for an exit, and Xiao Fa researches exits. Xiao Fa makes exactly the successes he needs, and discovers another rule: if you succeed exactly, that skill becomes inherent for you.

Takanata leads Yanyu, Master Deng, and Kuan-Xi into a concert hall with a huge pipe organ, and an audience of expectant (and ominous-looking) bunnies, and the remaining seven head to a town under fire from a hail of arrows and explosions.

Lijuan fails to dodge the incoming artillery, and falls away to a "jail" realm, where she has to buy skill to remedy her failure (which also becomes inherent).

Cai Wen, still at the mushroom, makes friends with one of the masked creatures, and buys another "pet" shtick.

The party decides that splitting up based on specialty does make sense, so they decide to regroup and split up differently. Going backwards requires an anchor roll, which becomes more difficult the farther or more frequent you go back. It also becomes clear that the deeper in, the harder the roll.

More realms are encountered and battled, more or less successfully, and the group begins to spread out and venture deeper into the dreams.

Back in the Material World, the guardians are waiting in the White Pagoda. Some of the anchors register tugs as some people come backwards a bit, and then there is an earth-shattering kaboom, as all of the anchors and all of the guardians except for Anto fly away from the senchi chamber all over the map. The three animal anchors (Squeaky, the adorable snake, and the dragonet) are easy to identify, but the others are oddly difficult to make out until one gets close.

A monk runs up the path to the Three Pagodas, collapsing in exhaustion as she gasps out "They're coming". Yanzi warns the other guardians to only carry one anchor at a time, and to only have the designated guardian put the anchor in the senchi chamber.

More monks, these dressed in black, run onto the map.

Yin-Xiang sends a message via the Moon (which is on the card with the cannon, so She can communicate with the party) warning Yanyu that the anchors have been dispersed and to not try to return yet.

The combat at the Pagodas continues, as the guardians regroup and try to prevent the outliers from being too surrounded by foes.

Meanwhile, the party advances through dream-scenes in drift. Yanyu spots in the distance, a golden pagoda surrounded by bees, but a man in a gi tells her it is not yet for her, and brushes her into another card, a bathhouse. The bathhouse is not for him, and he brushes himself away from it, but tells Yanyu to tell Zhou that Black Tiger is watching.

Anto figures out that the senchi chamber has been sabotaged, and will spit out some of the anchors every drift. The Countess shines the light of the Sun on the chamber to try to find out more details, and Anto tries to send a dream to the party to tell them what is happening.

Analyzing the world of the dream-scenes, the worldwalkers determine that in order to reach the pagoda of bees, they must both defeat Black Tiger and have more points controlled than the number on the "jail" card associated with the pagoda. Also, at the end of each turn, everyone has to buy one level of any skills which are inherent to them.

Xiao Fa and Xian reach a peaceful grassy realm on the way to the pagoda of bees, but when faced with Black Tiger, they are unworthy (or, in Xian's case, avoid fighting), and are punched into a much more ominous card.

"Welcome to the oubliette of blades."
"That is not a little girl in grass. I want the old card back." -Xian

Min Feng, back in bugland with Yanyu, thinks about eating the mushroom, but Yama tells her not to. A bug attacks him, and promptly dies.

Yama wonders what Min Feng's intention is, but she says she's just waiting. Yanyu adds that she's rescuing someone who is trapped. Is that important? Yama notes that he is here to investigate the "woman who holds life and death in her hands", and Yanyu admits that the person they are here to rescue might be her. Yanyu says it might be her. Yama doesn't have an opinion yet on whether she should be rescued, but might, once he examines her. He wonders if Min Feng and Yanyu have a recommendation as to which path to take. Min Feng tells him that the fighters went this way, and the talkers went that way. Yama heads in the direction that the talkers went.

Back in the Material World, anchors have started to be returned to the senchi chamber when there is a roiling in both the water gate and the well, and out of the water emerge women in red (Kali's daughters or handmaids or something). The Green Pagoda is guarded by some of the more fightery guardians, and Shanxi sets up dummy figures in the windows of the Red Pagoda to make it look guarded. The red women stab Tetsuzan a lot, but he doesn't quite fall.

Jia Jia attempts her own prophetic art, and concludes that Tai Lung and his followers will be next, and sure enough, they appear at the top of the trail. Tai Lung calls them the "adepts of the Dark Pagoda", much to Master Zhou's faraway consternation.

The Moon tells Yanyu that her anchor has been returned, and Anto's dream finally shows up, in the person of furry creatures in top hats, who explain somewhat confusedly about things going in and out of the place.

Yama proceeds up the tree of cards (he can play the organ quite well).

Master Zhou concludes that Black Tiger isn't Tai Lung, he's some sort of dark reflection of Tiger. Merit ponders Lijuan's prophetic art, and thinks that they will need to split up once more to come at the pagoda of bees from more paths.

Xian goes into the Underwater Treasure Hunt with ``Anubis’’, and has a chat with Coyote (who was disgused as that Jackle-headed guy), but they don't come to any sort of amicable conclusion. Merit plays pai gow with the Guardian of Time (and Lijuan wishes she were there to buy Unaging). Takanata plays chess with a chess mouse (and Cai Wen wishes he were there to buy strange game-tactical shticks).

Kuan-Xi goes to a place of ivory dragons, but declines to become the Queen of the Dragons.

The worldwalkers remember that the way to build an escape is to have a jail on the board, with a lower number than the total value of the controlled dream-scenes. But getting a jail requires failing something. (Advancement only comes through failure…)

"I am Master Zhou of the White Pagoda, wearing the Green Sash of the Tiger, and I call Black Tiger to me to fight." -Master Zhou, attempting Demon Summoning

He fails the required number of demon summoning successes, opening a path to a jail - Tsai Su-Yin is there, preparing dinner, and Black Tiger steps in front of her.

"She is not for you yet." -Black Tiger
"I think she is. We have met the requirements. I have 45 levels of kung fu." -Master Zhou
"Oh! Don't forget the special bonus for those who have 50 ranks." -Su-Yin
"Wait, what?" -Master Zhou

Master Zhou borrows Takanata's kung fu temporarily, enough to reach 50 ranks and realize that while this is interesting, it is not directly applicable to the fight.

After an epic Kung Fu match, it require two karma to defeat the Black Tiger (Master Zhou's last two), but then it is done. The jail becomes more pleasant, a pagoda of Tiger Bee kung fu, and Master Zhou has the option of learning the Way of the Tiger Bee. Already overspent on points, he resists.

"All right! It's time to save the King!"

The incomplete escape is probably because the anchors are not all back in the senchi chamber and so no one has left the World of Dreams Below..

Back in the real world, Yoshi tells the followers of the Dark Pagoda to abjure the path of evil, lest they regret it for the rest of their lives. Tai Lung plays his "not the smartest of the Marked" card again by underestimating Hirasoto as "just a ninja".

"I'm Precious Jade. He's Tai Lung. Who would you rather work for?"

"Come with me and save the world!"

The party starts retreating from the deeper dream-scenes (Po rides an elephant out of one card and into the next, which is Just Not Right). Master Zhou is 19 points in debt (having made a mistake in his pre-run spending), and is at -19 skill trying to worldwalk back out. This makes helping Su-Yin out more difficult.

Yama does not quite catch up to Su-Yin, before she is escorted from the dream.

"Very well, you have won this round, because I forgot to appear during the first drift." -Yama

Tai Lung turns to mist and escapes when Master Zhou returns, and the remainder of the mooks are quickly mopped up.

Master Deng, whose anchor was left in the Red senchi chamber, has ten rho, and Tetsuzan, who was overwhelmed by Kali's handmaidens, has some pi, a weird form of corruption. But those are for another day. Tsai Su-Yin is saved!