The Hidden City is divided geographically into two outer rings and an inner circle. Additionally, the Jade district extends from the center out to the edge, raised above the rest of the city on large stone arches (so the districts underneath connect). 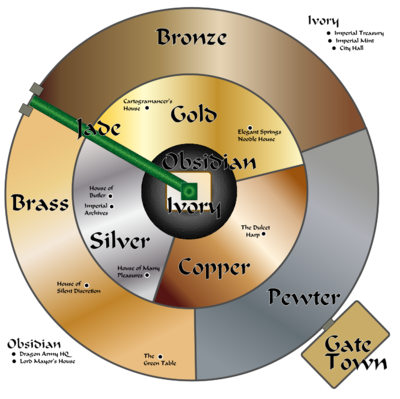 Guards will tend to stop people and check their keys/passes once per trip, but are not perfectly efficient.

It is (usually) possible to leave a district for a lower district towards the exit of the city. Otherwise, people caught without a key or pass are subject to arrest.

There also exist iron keys (which cost 6 li), which are for guards and soldiers only - an iron key allows the holder to carry out their assigned duty. This includes soldiers stationed in the city, as well as mercenaries and bodyguards. For a bodyguard, such duty includes accompanying the person they are assigned to guard, or going to the person they are assigned to guard. Switching from guarding one person to another should only be done when both parties are present - a soldier with an iron key cannot wander all around the city by picking arbitrary people to guard.

To Fen-Xi's descriptions of the district follows, with successes needed to do something successfully in the district, and the price (in li) of a key or upkeep on a key.

While most of the districts are difficult to do things in, there are also extra ways to add dice: