Difference between revisions of "Military Situation"

This is a holding page for information about threats, allies, and so on, in the military sphere. At the moment, the focus is the (eventual, becoming imminent) expectation that the Warlord will attempt to destroy the party militarily.

During Week 3 of the Winter Mechanic, looking into the Warlord's plans, Takanata created this: 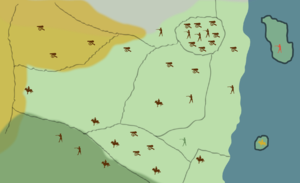 ...which seems to be a reminder that we were warned that the Marked will eventually come after us openly (i.e. perhaps militarily, though other interpretations are possible), and that we have almost nothing to oppose them with.

Dragon Army (presumed to be available to the Obsidian Warlord)

Total of about 140 points

Resources that could help build an army