Difference between revisions of "Running the Shadows"

The crew gathering for the theft meets at the warehouse one last time. Present are:

Crane explains that they expect no heavy armed resistance, and this is a snatch and grab job, so they are going in without a hitter or a grifter. He expects few guards, but lots of locks and traps - and the traps will be unusual ones. The score will be several ancient artistic objects held deep within the secret crypts of the Court of Distinction in Butterfly Meadows. Each one will go for an untold sum. Given the nature of certain... effects, each thief will wish to take only one of the objects lest things go poorly.

"Do not screw around with this part!" -Master Crane

Master Crane continues that two of the crew have registered specific requests and will have priority for those two objects. The rest should grab what they think will sell the best. Having put the team together, Crane expects a 20% cut from anything fenced, or equivalent payback if the loot is kept, as his finder's fee.

Sei-Lin confirms that he gets dibs on the Necklace of the True Heart, and then wants to know what happened to Master Tiger. Master Crane gives him a quelling look. Nobody gets to be Master Tiger.

A fast ship takes the group to the Harbor of Shining Reflections, and they make their way to the memorial shrines of the Court of Distinction, without incident.

The crew creeps to the shrine entrance. There is a wall around the grounds, which should not be a lot of trouble to scale, even for the elderly Mistress Monkey, but Mistress Tortoise says that going through the entrance will keep the intrusion timer from starting.

There are two guards on either side of the portico entrance to the larger building, but they seem remarkably inattentive for the rank that their uniforms would indicate. After watching the pair for a bit, it seems clear that their perception check isn't even in the double digits. The guards chat a bit between themselves - it has been a long week, and they're very tired. The group dashes past the hapless yellow guards one at a time, ducking into an alcove outside the Court building. Master Crane says the entrance to the crypts will not be in the main building, but in a smaller building to the northwest, so they should head that way. Sei-Lin leaps to the roof, likely to be a bit more out of the way of the guards, and then pulls the others up behind him.

They proceed to the northeast corner of the roof, and look out over the dark snowy grounds. Sei-Lin creeps forward to get a closer look at the crypt entrance. 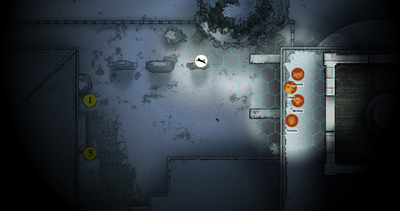 These two guards don't look any better than the original two, but the door behind them looks more seriously, and even the most skilled of picklocks may have a problem crouching between two guards to open the door.

The group cautiously advances, hiding behind monument stones, and Sei-Lin and Mistress Tortoise are getting ready to divert the guards with a distraction, when the sounds of voices comes from the garden to the south. The new purple guards, in contrast to the yellow, seem to be at the peak of competence, and everyone crouches in their hiding places, barely breathing.

An older woman, elegant in yellow silk, accompanied by a number of purple guards walks to the entrance to the crypt, accompanied by the Captain of the Guard and Master Crane hisses to himself. The yellow guards bow low, and Purple 1 opens the door to the crypt with a small gold key.

The Captain frowns, and looks like he wishes that he could say something. The woman touches her hand to his arm, and tells him with a smile that he should know better than to fret over her whims by now - after her son mentioned the Silk of Unspoken Favor, she simply wished to remind herself of Master Nakahari's artistry. 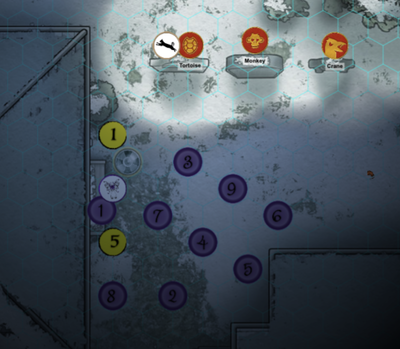 As the crew watches, the entire group heads into the crypt, and Master Crane curses at great length in very minimal but expressive gestures.

But then, twenty minutes later, the group emerges again. Purple One goes to lock the door again, and Sei-Lin pays careful attention to the pocket he keeps the key in, but the woman in yellow silk raises a hand to stop him.

"Those below deserve to have proof of their artistry in the World After, but it grieves me nonetheless to lock beauty away from the world. Leave it open, just for tonight."

The Captain of the Guard continues to model the "I am not arguing though I really want to" look, and the group leaves.

The crew waits a bit more, just in case there are more after-midnight grave visitors. Master Tortoise declares that it is not, in fact, a trap - though the whole area is still waiting to start the intrusion countdown, and it will probably start ticking when someone picks up something - and there is a quick dash for the crypt stairs.

"Why did we even bring the lock guy? If all the doors are left open, I think we should split his share." -Master Phoenix
"Be a shame if you somehow got stuck behind one of these crypt doors. Old things, probably very rusted." -Mistress Monkey Sei-Lin and Mistress Tortoise declare the first landing safe, and the pair starts to scout forward.

Sei-Lin's darkvision spots the guard early - but it's a yellow guard, so shouldn't be too much of a problem. More of a problem is that there's a shrine on the north wall, which Mistress Tortoise says is sort-of-mostly a trap. Sei-Lin thinks he can disarm it, but only temporarily - although he can creep forward and keep it disarmed, while Mistress Tortoise passes out ghost money for each of the crew to leave burning at the shrine, which should keep it from going off.

Then, the group gets past the guard, and into a larger antechamber. There are more shrines here, and Mistress Tortoise leaves ghost money burning at all of them.

"Here's some more, for each of you. Every time you pass one, leave a bill. Every time." -Mistress Tortoise

The doors are all locked, except for the southwest door. Master Phoenix looks through each of the doors, and doesn't spot any more guards. He reports that the near doors open into small rooms - the near west room has a far door, the near east doesn't - and the far doors open into a passage (southeast) and a passage to a stair (southwest).

Sei-Lin thinks that there's loot all around him, with interesting loot to the northeast and below him - and the biggest loot (for him) is below him. Master Crane says that the Silk (which he is after) is also obviously beyond the unlocked door and below, but the others believe that some of the northeast loot may be what they're after. Mistresses Monkey and Tortoise start to go about unlocking and disarming all of the doors, (Mistress Tortoise identifies them as alarms rather than deathtraps), but before they have unlocked the southern doors, more voices are heard coming from the entrance. The group ducks into the near northeast room.

"This is an extraordinarily busy crypt for this hour." -Master Phoenix

The crew shuts the door behind them again (and Mistress Monkey quickly burns some more ghost money), and Master Phoenix peers through the door. A young woman in lavender, accompanied by two of the more impressive guards, is heading down the corridor. However, she stops before one of the shrines, burns some ghost money of her own, and some sweet-scented incense and flower petals. 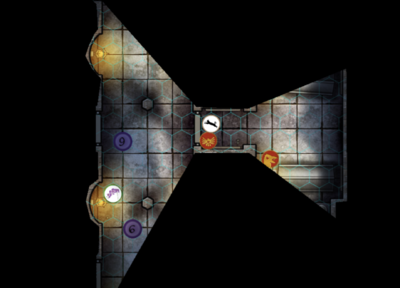 "Mama, it's me. I have to decide whether to agree to the match with Lord Te. At first I thought he was marvellous. I know Papa was older than you, so I don't mind that. And he's had such an interesting life. And Madame Hai-Ling said it was a good match. But... something's happened, and I don't know what it is. Madame Hai-Ling vanished and I think something happened to her, and I think Lord Te knows something but he says I wouldn't believe him and I... I think she might be dead. Is she there with you? Did Lord Te kill her so she would... no, he couldn't have! Mama, just give me a sign?"

The woman kneels before the shrine, bows her head, and waits. The crew waits. The woman waits. The guards wait. Everybody waits.

Everybody waits some more.

"Oh by all the flea-bitten monkeys in the world...is she going to sit there until morning? I'll give her a sign all right. I can make that candle go up like a rocket and burn off her eyebrows, she'll go away soon enough then..." -Master Phoenix
"Couldn't you give her a good sign?" -Sei-Lin

The young woman, and the two guards, head away again.

"Okay, this is no good. By the rule of Threes, we're going to have one more thing that doesn't go according to plan, so everyone stay sharp." -Master Crane

The crew heads to the northeast room, leaving Masters Crane and Phoenix to watch at the door for more surprises. Mistress Tortoise acquires the Mirror of Inner Reflection and Sei-Lin points out the Sleeping Jade Rabbit to Mistress Monkey as the most valuable piece in the room. Mistress Tortoise says that the timer has started now, so no more standing around waiting. 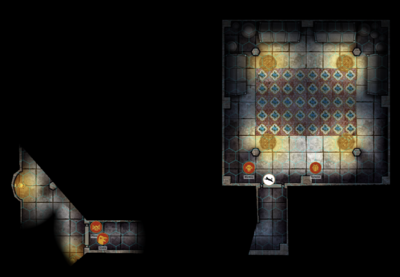 The mystical traps are increasing in difficulty, but Mistress Tortoise says that as long as they confine themselves to one item each, she should be able to manage.

In the upper hallway, Sei-Lin thinks for a moment that he hears a flapping sound, but then it is gone and he can't locate whatever it was.

Then, they head through the southwest door and down the stairs. 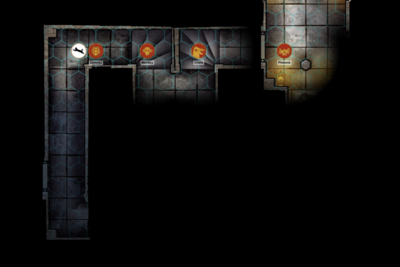 The lower crypt is the largest yet, and Sei-Lin's loot sense tells him that each of the niches has something valuable. When he picks up the Necklace of the True Heart, even with Mistress Tortoise's ghost money, he senses a not-quite-a-full-trap closing on him, making everything harder. Master Crane takes the Silk of Unspoken Favor, and Master Phoenix picks up the Portraits of Sea and Sky. 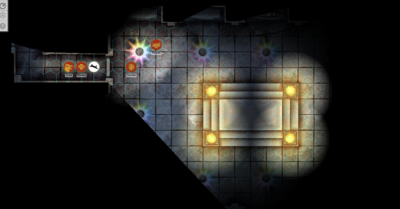 The pillars in the crypt begin to glow with an odd unearthly beauty, that even Sei-Lin is tempted to stand and gaze at, but he tears himself away with a (slightly harder) will roll. The group pelts for the stairs.

They reach the door into the upper hallway, and Master Tortoise starts to open it 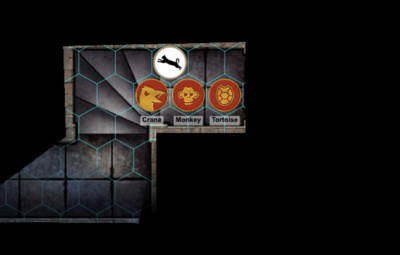 ... just as it opens from the other side. 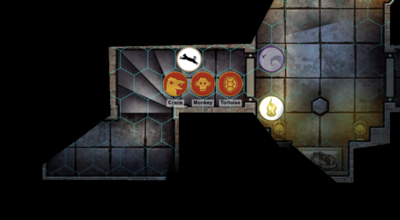 On the other side are a young man and woman - he is wearing yellow silks, and she is dressed like a fighter, in golden armor. They seem as surprised to see the crew as the crew is to see them.

Everyone makes a run for the exit. The young man takes Mistress Monkey down with a sword sweep, and the armored woman flings a net around Mistress Tortoises's feet.

As they run past the northeast door, Sei-Lin hears a whisper: "Let me take your treasure, and if you are caught, you will be found to have stolen nothing, only trespassed." He thinks that this is likely to be true, as far as bargains go, but trusts in Claim the Prize to get him out, and declines. Only Sei-Lin and Master Crane are there when they regroup at the meeting place afterwards. Master Crane says he heard the same whisper, and also declined.

Before they sail back to the mainland, Master Crane does some information gathering - rumor has it that Prince Ti-Jun personally stopped some vandals in the Court of Distinction, but rumor also describes him as in a very poor mood, despite his victory.
Retrieved from "http://boojum.scripts.mit.edu/Dragon/index.php?title=Running_the_Shadows&oldid=14289"