The Tanzhe Plain is governed by Lo Xiao Fa, an Imperial scion who is widely rumored to be maneuvering to ascend the Dragon Throne. His mandate as Provincial Governor was formally granted by the House of Benevolent Oversight, though in practice, the House of Exuberant Interference appears to be the main logistical support for Governor Lo.

There are several towns large enough to have their own mayors. They attended Governor Lo's installation ceremony, offering de facto support, though there has been no indication thus far of the governing mechanic which Governor Lo intends to use.

The administrative center of the Tanzhe Plain is the nearby Pavilion of Abundant Tea, wherein Governor Lo's advisors and allies are known to pass many hours while discussing the issues of the day, awaiting urgent news from the Butler, and preparing to take Exuberant actions at a moment's notice.

Some other tents of note: 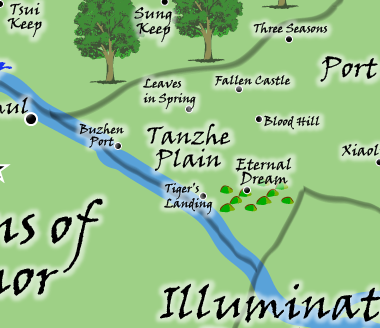 These are some of the better known temples, all situated in the hills around Nan Yue:

The Monkey Bard draws large crowds wherever he goes, mainly because people want to see what happens the next time he crosses Governor Lo. Lord Zhu of the House of Exuberant Interference has been urging Governor Lo not to kill him.