From Dragon
(Redirected from Yoshi)
Jump to: navigation, search 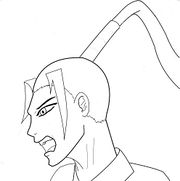 Yoshi is a wandering bishounen hero from the Isle of Beauty who studies his opponents' spirits so that he can redeem people rather than killing them. He approaches social challenges with insight and honesty. He is also a bit of a goof, since he believes in humor and happiness and having a good time with life (and not taking himself too seriously).

Yoshi has long, shining black hair that he wears in a long ponytail tied with an auburn ribbon. He typically wears fashionable samurai clothes with a dark blue and white motif, bearing the Tara family symbol (a fish in a circle). At his waist is a blunted sword given to him by the Queen of the Isle of Beauty.

I believe that everyone is good at heart. But all too often good people are driven into wrong behaviors by pain, or fear. One of the first techniques I learned is to sense what has driven someone to do evil.

I have observed that, for many people, the pain, ignorance, and fear that drive them to incorrect actions have become internal. Their compassion has been hardened over by loss, their ability to trust has been crippled by a past betrayal, their hope worn down by hardship. The human spirit is resilient, but sometimes people need help to nurture it. I try to provide that help.

Regrettably, I often encounter acts of villainy in progress, which leaves me no choice but to oppose them. But it is always the evil act, the misplaced fear, the underlying pain that are my adversaries, never the person. The person is always full of promise, someone I'm trying to save from the cycle of pain and fear.

Yoshi doesn't pester the other party members about killing, since he generally prefers to inspire by example (and doesn't want to be a pest in meta). He recognizes that capital punishment is often imposed in the Empire, though he tries to give captives a chance at redemption and will argue for leniency if they sincerely wish to turn things around. Execution destroys not just the evil, but the underlying person, and that's always a tragedy that Yoshi wishes he were skilled enough to prevent.

Yoshinosuke was taught the Way of the Kensei and the Gateway of Redemptive Principles by his grandmother Tara Shien, who pioneered the Way. She had been a healer at a time when violence rose to such ferocity that healing the injured was as hopeless as holding an umbrella against a flash flood. When Yoshi's father, Kinren, was very young, Shien realized that he would grow up in a world of bloodshed unless something changed. She took up the way of the warrior to dam the tide of violence at its source. The stories and confessions of the wounded warriors she had treated gave her insight into the workings of the mind, and her gentle and noble spirit allowed her to move their hearts. She became a leader of warriors, and after many years of campaigning she restored harmony to the land.

Kinren's father was sickly and eventually passed away. Kinren had been raised on stories of his mother's glorious victories in the field, and longed to emulate them. But with Shien away at the front, she could not impart to him the spiritual clarity that lent meaning to her struggle. Kinren thirsted for battles that no longer needed to be fought. Eventually this led to a rift between Shien and Kinren, as Kinren left home to become a mercenary officer. He married Lin, of the Tokai family, who was disappointed that he did not live up to the nobility of Shien.

When Kinren's first child, Yoshi, was born, Lin brought him to Shien often when Kinren was away on campaign. Shien educated him as she would have done for Kinren had she been able.

A Kensei measures the spirits of others, and true victory is bringing another into harmony. A Kensei does this by example, with psychology, and by proving the strength of his spirit in battle, if necessary. As an aspiring Kensei, Yoshi relies heavily on his courage and good nature but is developing his powers of perception and swordfighting.

Shien encouraged Yoshi to study with other warriors. During a summer at another dojo, he became very close to Reiko, a daughter of the Nakashima family who had a natural talent with the sword. Those around them expected their friendship to blossom into romance, and but for fate's intervention it could have been so.

One day Reiko and Yoshi came upon a pair of bandits accosting a traveler, and quickly put the bandits at their mercy. The terrified bandits begged for mercy, and Yoshi convinced Reiko to allow them to live. In retrospect, Yoshi should have recognized that their fear was not entirely directed towards the warriors in front of them, should have realized these were no ordinary bandits, should have realized that they feared failing their leader and realized what that meant. But he didn't, and he knows and admits that it was because he was too eager to prove his merciful nature.

Hungry for vengeance, the bandits tracked down Reiko's family. Reiko's family were not warriors, and the bandits slaughtered them and made sure she and everyone else knew who had done it, as a warning not to defy the bandits. Reiko was furious - at Yoshi as much as the bandits. She rebuked his attempts to reach out to her and set out on a bloody path of vengeance, stooping to gruesome methods to track down and destroy every last one of the bandits. She sees her goal as justice, but she is ruthless and merciless in carrying it out. She aspires to impose her personal justice on the world, but part of her must feel the pain of causing so much bloodshed. If Yoshi could achieve the same result without that stain on his soul, it would be unbearable for her. That is why she needs to convince Yoshi of the rightness of her philosophy as much as he longs to persuade her to abandon it.

Need 29 more EPs and a source for a new shtick to implement:

Then I'll buy stats for a while :)

Shticks that don't have a source yet

(now that I have played some _and_ have watched kenshin recently, I have more ideas; also influenced by Gurren Lagann)