A number of people have declared that they want to investigate, or scout, or explore, or question, or possibly rescue, various things and people in the capitol. Sei-Lin has been itching to case the Cartogramancer's house, Cai Wen wants to know what has happened to Willow, Xiao Fa wants to visit one of the palaces in the Jade District, and Min Feng is still curious as to what Precious Jade is up to. Kasumi doesn't have any immediate plans, but thinks it might be worth keeping an eye on people planning on charging into trouble.

So, it is off to the Dragon's Throne, though the exact plan for what to do once the group arrives is still up in the air. Kasumi yoinks the Monkey Talisman, and Cai Wen and Min Feng make sure everyone is in disguise, albeit not good enough disguises to fool the upper districts. They decide to use a cover of Tourists Visiting the Big City, in case anyone asks.

At the gate to Pewter, the guards ask if they are there for Business, Pleasure, or Investigation. They declare themselves to be there for Pleasure, and the guard cautions them that they will be barred, bureaucratically, from business and investigation during their visit. Wait, what? Can the guard go into more detail on that? After a bureaucracy roll, the guard explains: The Lord Mayor has used his emergency powers to declare an investigation mechanic, but if the group is not there for investigation, it is not relevant and need not be explained.

Okay, fine, okay, they admit that they are there for investigation, and the mechanic is explained. 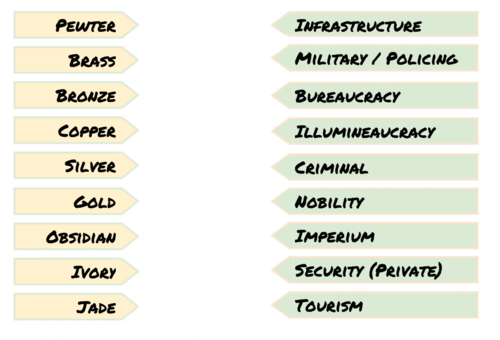 As the group is entering under a gold key, they are entitled to two questions about the mechanic. The first is "what is an example of an awesome investigation". Well, the least possible awesome success is to get double the successes needed, but a better way is to BRING IT and succeed. A perilous success does require a significant chance of harm with failure.

"Will we have to report the results of the investigation?"
"Don't do that, half of this stuff is illegal."

The party heads to the House of Silent Discretion, where they take rooms (and Sei-Lin has some more lunch).

Sei-Lin declares that he is going to Investigate the Police in Silver by picking all their pockets and seeing what sort of interesting stuff they have on them. Kasumi goes with him, though the two of them are stealthy enough that "together" is a little iffy. Sei-Lin happily tries out the "spend Cai Wen's status as fortune" mechanic, as he never gets to spend fortune normally. There will be a lecture about this later.

The pickpocketing mission is a success (and perilous, but not awesome), and Sei-Lin keeps the money he acquires, but turns over to the party three iron keys and a guard schedule. Seilin will head to Silver to pickpocket all the guards. Kasumi goes with him. They go over the wall and hide. Seilin spends some of Cai Wen's status, much to his disapproval and later lecturing.

The Cartogramancer's house is in Gold, so perhaps they can do some preliminary surveilling. As a preparation for surveillance, Cai Wen asks his Municipal Architects (an Illumineaucracy group) to acquire the floor plans of the original building. This turns out to be an Investigation, which is successful (but not perilous or awesome). Oops.

Cai Wen is curious who the mystery player he has discovered the organization of is, and one group that he could talk to about it is the Inner Ring Fences, in Copper. Burning two copper passes, he and Sei-Lin head to Copper, where Sei-Lin finds some fences with his street contacts.

The fences are happy to help move some property, but Cai Wen says he wants information instead. Oh, well, what sort of visa did he enter the city with? Investigation, says Cai Wen. Well, that's okay, then.

"Who calls the shots above with the House of Fragrant Savor?" -Cai Wen
"You want us to rat out the boss of bosses? How much money did you bring?"

Sei-Lin rolls his eyes as if to say "all of it", somewhat handicapping Cai Wen's negotiation, but Cai Wen is willing to offer fifty li per fact, which is a seriously good price.

"I would like to state for the record that this is not bribery, I am directly selling information, which is commerce."

The group is a little punchy, so the next investigation best described as "Wander around Pewter saying 'Oh, what shall I do with my two tael?' until someone tries to mug you, and then interrogate them."

Cai Wen does not, in fact, keep two tael - he gives all but fifty li to Xiao Fa to hold, and heads for Pewter. (If one of the others goes, facing a Pewter mugger or two is unlikely to be perilous).

He does eventually attract three muggers, but due to his dodge-all-mooks shtick and a lot of fortune, he is never in any real danger (so not perilous), and he takes one mugger precisely to zero hit points before the other two flee.

Sei-Lin starts raising the suggestion that they do Awesome Perilous Tourism, and that he go and sit on the Jade Throne. The peril level there might be somewhere around "fatal", but it would definitely be awesome.

"Maybe that should be the last thing we do here..."

Cai Wen gets the "minimal awesome" success interrogating various servants of the nobility in Brass.

Xiao Fa decides to head off Sei-Lin's mad plan, and goes to poll the chi around the Jade Palace. He and Min Feng burn two jade passes to visit.

The Garden of Benevolent Tranquility refreshes his chi, and the Garden of Extended Spring proves not very meditative (a little like one of the gardens at the White Pagoda), but the Garden of Heavenly Peace is most interesting, when he realizes that there is someone standing right in front of the Jade Throne starting the chi flow again. It is probably a full week's worth of ritual, which could be disrupted, but that's back to the "possibly fatal levels of perilous" plan.

"Okay, I have a new terrible idea: we should break into the Lord Mayor's house to investigate the bureaucracy!" -Sei-Lin

The Mayor's house is in Obsidian, so perhaps that should be the last thing to do in the city.

A Gather Information roll in Bronze on who the next Emperor should be indicates that most people in Bronze are in favor of the Obsidian Warlord.

Min Feng heads to the Ivory District to find out what tourists are buying, and what is currently in fashion. She gets a lot of general fashion tips, and notes that the talk of the District is whether the Mystery Shopper will show up. The shopkeepers notice that Min Feng is in disguise, and are briefly hopeful that she is the Mystery Shopper, but they quickly see through the disguise well enough to realize that she isn't who they are waiting for.

"They came into the city on an investigation visa and they already went to Jade, so she's not coming back to Jade. It's gotta be something about the key. But is she investigating the Mystery Shopper? Well, we'll tell her."

Kasumi and Sei-Lin head to Obsidian to burgle the Lord Mayor's house (and Kasumi buys 20 levels of inherent bureaucracy, just in case). She files enough forms to be authorized to break in, though she has to declare whether she is planning to look around, asssassinate people, or steal things. She declares that she is just there to look around, and is authorized for thirteen dice. Sei-Lin, baffled by the bureaucracy, has to keep dodging some sort of bureaucratic defense effect while in the house, though he can usually manage it.

The guards spot Kasumi and Sei-Lin, but Kasumi looks like more of a threat. They try to grab her, but the Monkey Talisman prevents that. Sei-Lin grabs some papers, and has to dodge two sets of bureaucratic defense (once for looking around and once for stealing things), and then he leaps out a window. Kasumi vanishes in a puff of ninja smoke. Their escapade was definitely perilous, though not quite awesome.

They mostly understand the Mayor's defenses, for future reference: 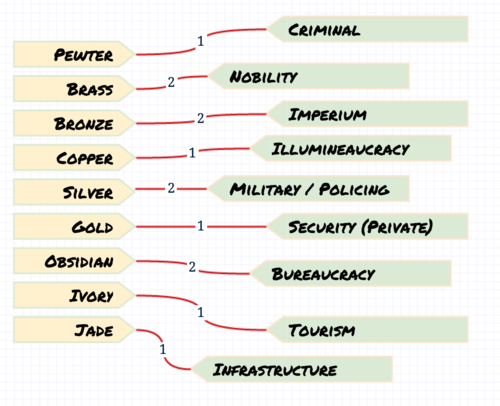 There are 13 points of investigation done; the party spends them to learn: